Discover a new sense of security with a new type of system: expertly installed, customized for your home, and controllable from anywhere.
Rest assured
Live safe. Live well.

Experience the confidence of total protection with customized, professionally installed security and a home that works intuitively to keep you safe and well.

As part of your Security Force security system you can be assured that your home is being monitored by our U.L Listed monitoring station. With extensive training in crisis management, our dedicated team of security and safety experts is monitoring your home 24 hours a day! 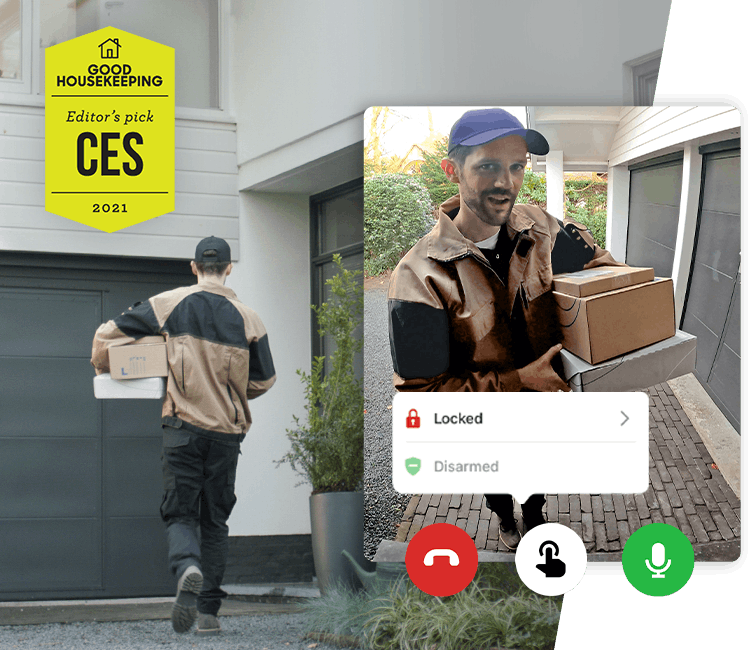 Stay one step ahead

By the time most security systems alert you to a problem, it’s too late. Alarm.com helps you spot unusual activity early and take action. Armed or disarmed, your system is on guard.

Securing your house for the night can be a pain. With Scenes, it's easy. Just tap your Alarm.com app once to arm your security system, lock your doors and adjust your lights. 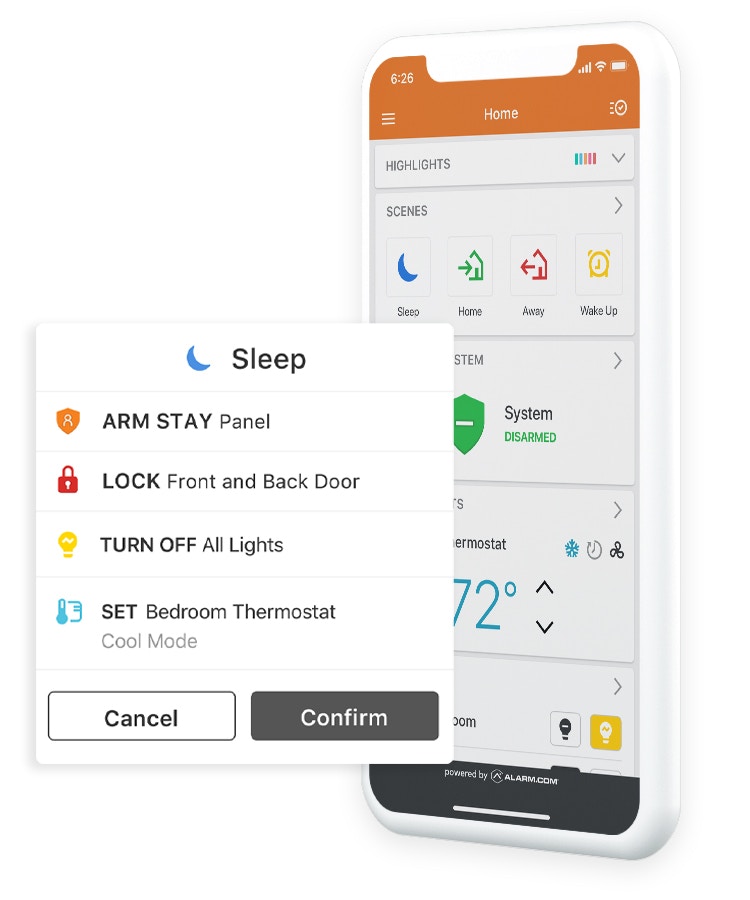 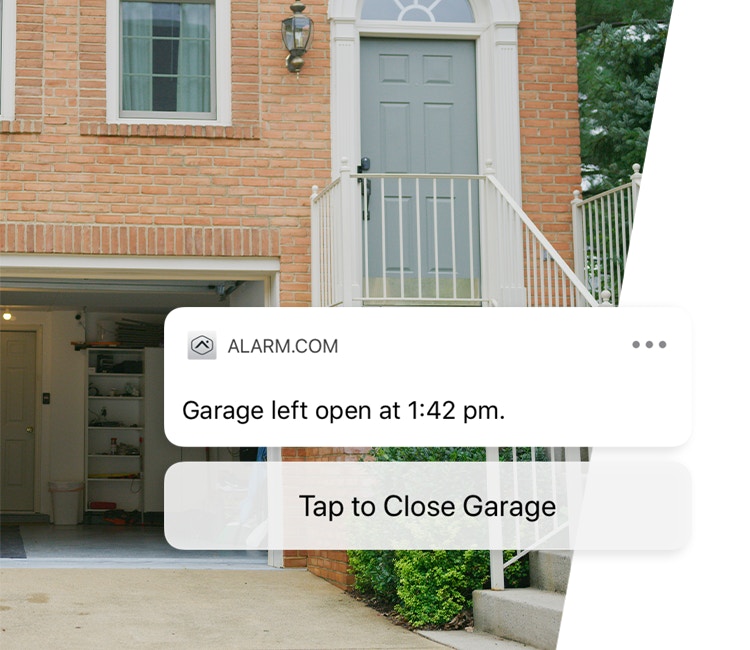 Ever leave home without closing the garage? We've got your back. Just tap your 'Garage Left Open' alert to secure your home remotely.

You need security that can withstand a burglar's toolkit. Here it is. Our cellular connection can’t be cut like a broadband cable, and our Crash & Smash technology can't be defeated with a hammer. 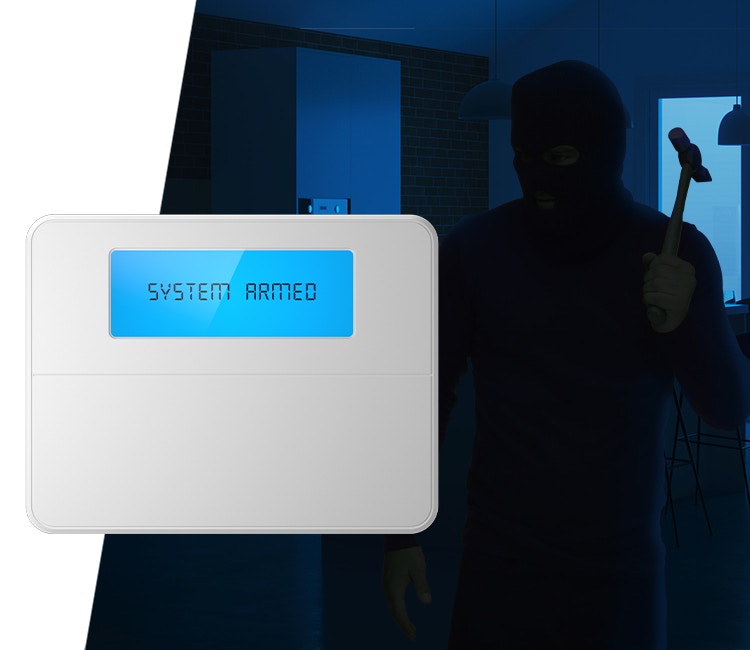 For residents of Raleigh/Durham, NC and the surrounding area, Security Force Inc can design a home security alarm system or business alarm system that’s right for your needs. Our trained technicians will work with you to determine the best locations for sensors, control panels, cameras and other system components. We will install and configure everything for you, working around your schedule to avoid disrupting your daily routine or business operations. When our work is complete, you can rest assured that your burglar alarm system is optimized and ready to protect your home or business for years to come.

Customized Security for Your Home and Business

Choosing a security alarm system with features and capabilities that meet the needs of your specific application is essential for protecting your home and business. The security experts at Security Force Inc excel at helping home and business owners in Raleigh/Durham, NC identify the right burglar alarm system components for their location, business needs, and budget.

Our highly trained technicians will conduct a walkthrough of your property, to get a better understanding of your home layout or business operations while also getting a sense for weak points and vulnerabilities. They may also request to see floorplans or blueprints of your property so that they can configure your alarm system to suit your existing infrastructure.

A professionally designed burglar alarm system is essential for preventing break-ins, thefts and vandalism. Additionally, it’s crucial that you have an intrusion prevention system that features 24/7 monitoring, so that law enforcement can be contacted immediately should a break-in occur. Adding video surveillance to your burglar alarm system is also an effective deterrent. When a would-be burglar sees that you have video monitoring, they likely will choose to move on to an easier target. Remember, burglars prefer to spend as little time as possible inside your home or business. Anything that represents an obstacle to getting in and out quickly is not worth their trouble.

It’s entirely possible to keep a burglar from even considering approaching your home or business. By placing warning stickers and signs near your home’s entry points, you are telling potential thieves that your location is not worth the risk, as they will quickly be caught in the act. Simply announcing that you have a security system can help keep your loved ones safe.

A study by the Rutgers University School of Criminal Justice found that residential burglar alarm systems not only protect individual homes and businesses, they also decrease crime in entire neighborhoods, resulting in fewer instances of burglary in neighborhoods with more alarm systems installed.

Often, items that are stolen in a burglary are never recovered. So don’t take chances when it comes to your valuable assets. Installing an anti-theft or burglar alarm system at your home or business provides a layer of protection for your treasured possessions and your livelihood, and can prevent costly losses due to theft.

Additionally, many insurance providers give homeowners or business owners a significant discount on their insurance premiums if they provide proof that they have a burglar alarm system and/or a video surveillance system. And if a theft were ever to occur, you will have important data to support your claim with your insurance company, if you have a functioning security system and can provide video of the incident to law enforcement authorities.

A burglar alarm system that provides immediate real-time alerts, and informs both you and law enforcement authorities of an attempted break-in, is critical for protecting your home or business. The faster that law enforcement is made aware of an incident, the more likely they are to catch the suspect in the act. Plus, if a theft ever were to occur, real-time alerts can prevent the “surprise” factor of returning to your home or office only to discover that you’ve been burglarized – or that the burglar is still on the premises.

Burglary by the Numbers

Burglary is a crime that continues to impact home and business owners throughout the United States:

A burglary occurs somewhere in the United States every 13 seconds

Burglary in the United States costs $4.7 billion annually in lost and damaged property, with an average loss per burglar of $2,230

Most residential burglaries occur between the hours of 10:00am and 3:00pm, when most people are at work or school

Take a minute to think about how an intrusion or burglar alarm system would impact these stats. Having an alarm system significantly reduces the likelihood of theft, meaning that these figures could be dramatically reduced if more people were to install an alarm system in their home or business.

Perhaps most concerning is the fact that, according to police, burglars are rarely caught in the act – and less than 15% of all burglary cases are ever resolved. But if law enforcement authorities have access to quality video of a burglary in progress, they have a much better chance of apprehending the culprit. An intrusion alarm system combined with video surveillance can go a long way toward protecting your assets, were someone ever to try to break into your home or place of business. Fortunately for Raleigh/Durham, NC residents, the team at Security Force Inc specializes in providing burglar alarm systems supported by video surveillance, with each system tailored to the individual client’s specific application.

Law enforcement authorities also report that while 70% of burglars use some amount of force to enter a dwelling or office building, they will first try a natural access point, such as an unlocked door or open window. Burglar alarm systems employ a variety of sensors to protect you in these instances, were you ever to let your guard down and forget to lock a door or window. Sensor types include magnetic contacts on doors and windows, glass break sensors, interior motion sensors, passive infrared sensors, photoelectric sensors, ultrasonic sensors, audio detectors and more.

In the time it took you to read the past three paragraphs, 13 burglaries will have occurred in the United States. You can hesitate and hope that property crime never impacts you, or you can take action now to protect your home and business. When it comes to burglary prevention, it’s always better to be proactive than reactive.

At Security Force Inc, we believe in being fully transparent with our clients. We understand that security is an important concern, and want to ensure that you feel comfortable working with us, and comfortable with your new burglar alarm system. After designing your security plan, our technicians will review every aspect of your new security system with you. If you have a question about any product or service that we’re recommending, please ask us. We find that our most satisfied clients are those who take the time to ask questions before their installation, rather than after the fact.

Our technicians will recommend the products and services they feel would be most beneficial for you, given your security needs and budget. However, you do have the option to choose other products. You can discuss these options with your technician, and together we’ll come up with the best selection of components to meet your needs and keep your family and employees safe, and your business assets protected.

Working Within Your Budget

We also take the time to understand your budget. Unlike other security companies, Security Force Inc offers comprehensive, customized solutions. Because our security solutions are tailored specifically to each client, we have flexibility to develop plans that can fit a wide range of cost structures. It’s best to be up front while our technician is on site, so that they can put together a security package that fits your budget perfectly. We’ve worked with Raleigh/Durham, NC clients from individual homeowners to enterprise level corporations. We are confident that we can customize a security package that meets your needs – without busting your budget.